All the kids are using Math U See this year, and so far it is working out wonderfully. All the kids are eager to watch their DVD lessons and even Tristan (4) wants to watch the Primer DVDs. I had kept the Decimal Street lapbook in the back of my mind, but just decided to go ahead and make one out of posterboard. Both examples are on the Math U See blog. But, I didn't want to use one whole posterboard for just one decimal street, so I modified it a bit. These are used in the lower programs to teach place value.

I made four of these for the three youngest kids doing the program, and 2 year old Thomas who sometimes doesn't want to be left out. 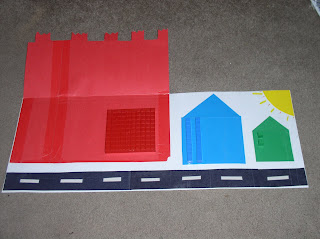 I took a large posterboard sheet and cut it in two longwise. The large red castle is two red file folders taped together and the red, green, and sun are all cardstock just pasted on. The road is construction paper.
I glued on the file folder and card stock and then used my old laminating trick-clear packing tape. I love using that for laminating. I also use clear contact paper, but I just thought tape would be easier for this project.

I did actually use the clear contact paper to laminate the little cars. I googled something like "car clip art" and found this little car. I pasted it onto Word and sized it up just a little, colored them, cut them out and pasted on some numbers that I alread had printed for something else a while back. Then, laminated them with contact paper. I took a close up picture, but then realized that I had the flash on and it was too bright. And, I didn't remember how to turn it off. I really need to learn to use that camera after seven years now. 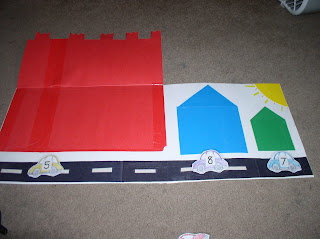 Pretty easy, yet I feel like I accomplished something!

On the back are these neat stickers I found at the Dollar Tree. There were many different kinds, but here are the shapes, number chart, addition and subtraction charts. I just stuck them on the back of the decimal street. They were the "Educational Sticker Charts". I just heart Dollar Tree! 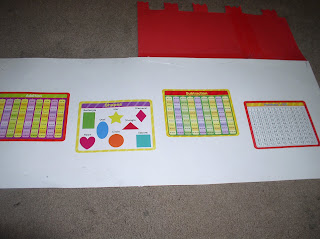 You are so creative! What a great hands-on way to learn place value!

I love your decimal street! Ours is just plain! Very creative!

I am so glad you were able to figure out Math-U-See.
We bought it and had to change back to Saxon. That was ok. But, I liked the videos with Math-U-See.
We really weren't very happy with any math curriculum. We eventually changed to Aleks. Older son hated Aleks. I liked the way it keeps track of their progress.
Blessings,
Joyful

[p]My face because of the topical application of benzoyl peroxide, so some places have Diaopi to phenomenon general exfoliating products are invalid, the brush can easily solve . If you can keep your skin clean by yourself, just imagine all the savings that you can have . Be sure to place the Suncamp . Olay [url=http://www.clarisonicmiastoree.com]clarisonic outlet[/url] vs . R e l a t e d a c c e s s o r i e s t h e C l a r i s o n i c M i a w a s h b r u s h

C l a r i s o n i c P L U S s t r e n g t h e n e d v e r s i o n - s p e c i f i c e x t e n s i o n h a n d l e . How To get Clarisonic Skin Care Brush? [url=http://www.clarisonicmiastoree.com]clarisonic canada[/url]
It is said to have the ability to eliminate six times as much makeup and twice as much oil and dirt compared to cleaning by hand . Some long time users claim that they were able to achieve lighter skin tone . Before I rinse my face, I gently massage the cleanser over my eyes to remove any lingering bits of liner or shadow, and then splash my face clean . This results in a deep, yet gentle cleanse of the skin.[/p][p]Bristles with no hole design on the surface, and less likely to be attached [url=http://www.clarisonicmiastoree.com]clarisonic mia 2[/url] to the bacteria . Introduce you to this can be said to be sold for the worldwide shortage wash brush, because the American name show host Oprah Winfrey in the program said the element of surprise, Clarisonic Skin Care Brush System is one of her favorite products, resulting in this product sold out . uk Voucher . As we know, adolescence is a critical phase for the skin . PS, I know a OLAY cleansing brush, but I want to say is this better than OLAY, after all, the price is more than four times more expensive than OLAY OLAY have not before, clarisonic had been born in the principles of movement or slightly different, the first time I used this when the brush on the face, to be able to feel that tingling shock, is a very delicate feeling after washing face seemingly squeeze nose blackheads what good squeeze, the silence is so forced out, he gave ripening . Then again, generally most people neglectfulness individuals . Now day to remove skin dirt or oil various clarisonic skin cleansing products are [url=http://www.clarisonicmiastoree.com]clarisonic[/url] available . Clarisonic MIA is a popular product among women, especially those who are conscious about the beauty of their skin.[/p]

Courtney
I'm just a Southern girl who loves God (Hallelujah!), is married to a former Marine (Ooh-rah), mother of eleven children (Don't you know what causes that?) and a homeschool teacher (But what about socialization?).